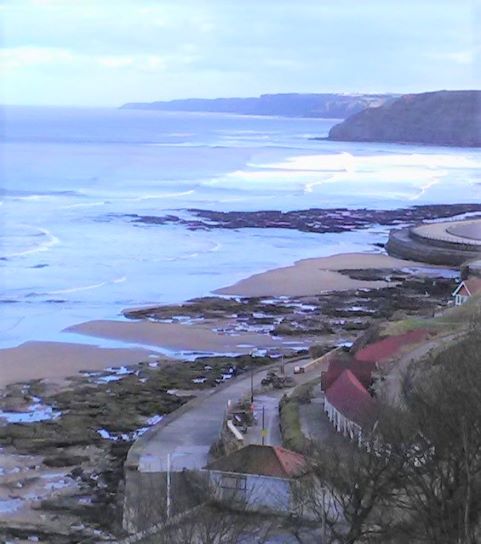 Every time I go to Scarborough I think if only Jane and I had visited the week before we’d have seen The Beatles in their heyday performing live at The Futurist, but we went the week after so we missed them. It was a painful mistake as we could have gone the week before if we’d known. It was 1964 and Beatlemania had hit town so I had to content myself with buying a mug and side plate with their pictures transfer-printed on. My pride and joy for many years but one day I guess Mum put them in the jumble because I haven’t seen them in a long while.

My gran lived in Scarborough so I used to go there every summer. Nothing could beat the thrill of Corrigan’s – the flashing lights, the buzzes and musical riffs of the slot machines, the rattle of the penny payouts, (few and far between) and then the people. The amusement arcades always seemed to be run by strong scary men covered in tattoos, sitting in the change booths or wandering around with spanners and hammers mending the machines.

I loved walking along the front checking out the souvenir shops, looking at the punters and the marvel shows. The best one was a woman in a bikini inside a water tank. I guess she was supposed to be an exotic mermaid marvel but when I paid my sixpence to go in all she did was wipe condensation from the inside of the glass. I suppose she was in some sort of sealed container that pumped air in but to all intents and purposes she looked like a second-rate mermaid sealed in a water-filled glass coffin.

The joke shops were a delight to behold and most of their goods well within pocket money scope.  Black plastic moustaches, itching powder, spectacles with blood shot eyes that fell out of the frames on springs and bounced up and down in ghoulish abandon. Then there were the postcards that had to be sent. The Wish You Were Here ones, the raunchy joke ones and the technicolour 5 views of Scarborough ones consisting of the beach, the castle, Peasholme Park, the Mere with its kiddies’ pirate boat, and the front with its amusement arcades.

The real beauty of Scarborough though, lies in the south beach. The haphazard groyne ridges are draped with seaweed abandoned by retreating tides. The beached whitened driftwood lies on the sand like some haphazard 21st century art installation. Here are the natural seaside smells. Not the salt, vinegar and fat of the amusement strip, not the sugary candyfloss but the natural gritty sea salt odours clinging to the outcrops dusted daily by grit falling from the receding cliffs. Crabs scrabble around in rock pools next to limpets stuck fast on rocks covered in a green moss that spreads freely like some cancerous growth. No cobbles or stones where sea meets land and best of all few people. Maybe a few young lads with shrimping nets and buckets, but no sand castles, windbreaks or deck chairs. Perhaps an elderly couple or two with their dogs and the occasional equestrian riding out. The south beach is for the nature lovers, the people who bring their own flasks of tea and tidy up after themselves, who sit on rocks, not on deck chairs and who are not afraid of a light shower or two. They bring macs and hats, and always have a cardigain in their bags and maybe a small packet of digestive biscuits in case they get peckish – the kind they leave for you on the tea tray in posh hotels. The people are there in the winter too with gloves and scarves while the amusements are shuttered and forlorn. The December wind can be wicked down on the beach, but still the visitors come. Not in their thousands, rather a dedicated group to feel the wind against their faces and watch it lift the seagulls who swoop around to land on the cliffs and squawk in competition.

I revisited a few years ago and Scarborough hasn’t changed that much which is a comforting delight and a surprise. The slot machine places are no longer called Corrigans but they are there. The mermaid marvel in the glass coffin probably has grandchildren by now and there are lots more coffee shops that in the old days were just plain cafes. The chippy is in the same place and the postcards are just the same except there are a lot featuring Princess Diana and Oasis. Cliff Richard is still going strong in the postcard world and so is the Queen. I only saw the south beach from the clifftop but I didn’t need to go down because even without being there I could smell the salt and the seaweed and all the things coastal to be found there.

They say you should never go back to a place where you’ve been happy and I see the sense in that but there’s something about a day trip to Scarborough that lingers on.

My debut novel 'New Beginnings on Vancouver Island' is a historical romantic saga that features Whitehaven in Cumberland and the west coast of Canada, Set in 1854 it is faction based upon a journey taken by my relatives when they signed up with the Hudson's Bay Company to open up the mines in Colville (now Nanaimo). This is my debut novel. My second novel, "The Shackletons of Whitehaven'' a saga novel about a shipping family was published in September 2022. View all posts by Lorna

1 thought on “Scarborough back in the days of “Love, love me do…””